The Event is over, View Results

The 60th Masters Water Ski & Wakeboard Tournament® will be held May 24-26, 2019. The Masters is known throughout the world as the most prestigious watersports tournament. The event began in 1959 at Callaway Gardens and is held annually during the Memorial Day weekend.

The Robin Lake site at Callaway, built specifically for the Masters, boasts an expansive pavilion with covered stadium seating, judges’ tower and media area. The action can be seen clearly from the beach and picnic areas. The immaculately maintained gardens, lakes, resort and attractions at Callaway provide a tournament venue like no other in the world.

An invitation to compete in the Masters is universally considered an honor and an acknowledgement of achievement for reaching the pinnacle in a given watersports discipline – only the world’s most elite athletes compete at the Masters! This tournament is IWWF/USA Water Ski and WWA sanctioned.

Callaway’s Robin Lake is nestled in a serene and beautiful atmosphere. Spectators are treated to thrilling competition while lounging in a remarkable natural setting. This event attracts thousands of spectators annually and enjoys media coverage in the local and metropolitan Atlanta areas prior to and during the tournament, followed by worldwide print coverage for several months. 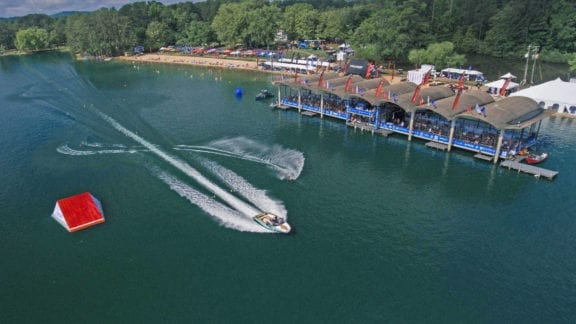 The 60th Masters Water Ski & Wakeboard Tournament® will be held May 24-26, 2019. The Masters is known throughout the world as the most prestig...
SKIING STARTS: Friday, May 24th

Over
HELP SUPPORT YOUR SPORT!    Join Up Now